This semester I am teaching interactive narrative again and we spend a great deal of time thinking about dramatic beats. 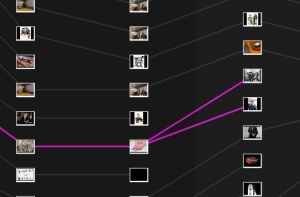 Our friends at the Stupid Fun Club have helped out by letting my students use StoryMaker the authoring system they developed for the crowd-sourced Current TV show, Bar Karma.This  screen shot shows how StoryMaker lets one or more authors make up alternate versions of the same beat and link them along alternate paths. Unfortunately for us, the system is meant to produce unisequential TV shows rather than multisequential interactive narratives, so we can’t build our stories in it. But it is still very useful because it imposes an organization of multiple parallel dramatic beats (the columns) capable of being linked by  multiple intersecting paths.

In ITM  I do not talk about narrative but I do stress the importance of semantic segmentation for encyclopedic design. Media make the most sense to us when we fit units of meaning into physical divisions, like a field in a record, a record in a database, a single paragraph in a chapter, a chapter in a book. Smaller semantic units can be chained together or nested inside larger clusters (encapsulated) to create greater complexity.

Dramatic beats in a play or television drama can be big, like the discovery of a body or the revelation of the murderer,  or small,  like the moment of hesitation before the hero steps out to face a dangerous situation or the parent knocks on the bedroom  door of the angry child. Like a database field  or a paragraph in a chapter they are necessary building blocks, that can be combined into larger dramatic actions.  We know how to do this for traditional unisequential narrative formats like movies and novels, but we are still learning how to do it for multisequential story worlds.