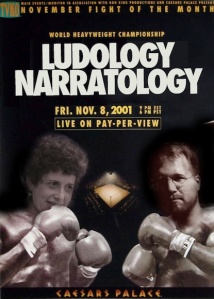 Recently this image has resurfaced in a talk by Espen Aarseth. I believe that the Ludology/Narratology discussion has moved on.  My favorite sign of the discussion changing occurred   a few years back when Espen announced that he was studying narrative elements in games.  But only last month I had a request for the content of my “preamble” to my DIGRA 2005 talk which I think was published in the Proceedings but may be hard to track down. So I am posting it here, along with a movie version of the slides. Espen introduced me for a keynote speech, and the body of my talk focused on other issues. But I felt a need to begin  by offering the “Last Word on Ludology v Narratology”.

The slides are here and  the essay is below:

The Last Word on Ludology v Narratology in Game Studies

The advent of electronic games as a new entertainment and art form is sometimes treated as an event divorced from cultural history. Claims have been made for considering computer games studies as a field not merely differentiated by its objects of study, but as as explicitly disconnected from the kinds of inquiry that have traditionally been applied to other cultural genres. According to this view, games in general and computer games in particular display a unique formalism which defines them as a discreet experience, a different genre from narrative, drama, poetry and also different from other “ergotic” or “configurational” forms like Oulipo texts (Aarseth 2001; Aarseth 2004) (Eskelinen 2004) (Juul 2001). The proper study of games is therefore an analysis of this unique formalism and a comparative study of particular games for their formal qualities (Juul 2003) (Aarseth, Smedstad et al. 2003). The focus of such study should be on the rules of the game, not on the representational or mimetic elements which are only incidental.  That metaphorical royalty of the chess king, the arcade player’s sense of himself as an outnumbered but valiant fighter, the elaborate shared fantasy of a dungeons and dragons group are all irrelevant to a critical understanding of the game (Aarseth 2004).  Proponents of this view sometimes admit the potential helpfulness of empirical player observation, but they are opposed to and even offended by game criticism that makes connections between games and other cultural forms such as paintings, films, digital art, or storytelling. Attempts by other scholars to discuss games as part of a larger spectrum of cultural expression are denounced as “colonialist” intrusions on a domain that belongs only to those who are studying games as abstract rule systems (Aarseth 2004).

The paradigmatic game for this view of game studies is Tetris. According to the formalist view Tetris can only be understood as a abstract pattern of counters, rules, and player action, and the pattern means nothing beyond itself, and every game can be understood as if it were equally abstract. A critic who focuses on players’ reports of the game as a metaphorical enactment of a life experience (Murray 1997) is accused of a lack of professionalism, because the only legitimate approach to games is a focus on their abstract formalism (Eskelinen 2001). Because the game essentialists want to privilege formalistic approaches above all others, they are willing to dismiss many salient aspects of the game experience, such as the feeling of immersion, the enactment of violent or sexual events, the performative dimension of game play, and even the personal experience of winning and losing. To be a games scholar of this school you must have what American poet Wallace Stevens called  “a mind of winter” ; you must be able to look at highly emotive, narrative, semiotically charged objects and see only their abstract game function. Indeed to the true believer in game essentialism, even the voluptuous Lara Croft is perceived as merely another game counter, an instrument for engaging with the rules. (Aarseth 2004).

This approach, which has been associated with the term “ludology,” which means the rather neutral enterprise of the study of games,   functions as both an ideology and a methodology. The ideology can perhaps be called game essentialism (GE), since it claims that games, unlike other cultural objects, should be interpreted only as members of their own class, and only in terms of their defining abstract formal qualities. Separate from this ideology is a methodology which is also called “ludology” but which could perhaps be better named computer game formalism (CGF). As a methodology, CGF emphasizes the formal properties unique to videogames and attempts to analyse them and to create descriptors than can be used to classify and compare specific instances of game form.

The GE/CGF group has made many contributions to the study of games. First of all, as ideologists, they have energized and focused the field by insisting on the legitimacy of computer games as objects of study in their own right, rather than as “colonized” examples of film or narrative. Secondly, as proponents of a formalist methodology, parallel to the narratological approach to stories, they have already made some highly useful observations. For example, it is helpful to think of games, as Aarseth has suggested, as “configurational” structures, which require us to actively manipulate their components. Furthermore, by calling attention to the formal properties of games, they have opened up a range of productive questions about the definition of games, the form of games, the boundaries between games and other cultural forms, that can be addressed from many directions.

As an ideology, a proscriptive theory of what game studies should and should not be, Game Essentialism has been particularly concerned with disavowing and differentiating itself from “narratology.”  The debate between “ludology” and “narratology” has concerned the field for several years now, despite the fact that it has never actually been joined.  The most recent attempt – an encounter between Henry Jenkins and Espen Aarseth in Umea Sweden in January 2005 — was judged by the participants and observers as lacking in the expected formalism of a contest. There was too much mutual interest and agreement, though some clear differences in emphasis. Aarseth complained in the ludonaut.org blog that he has had trouble debating narratologists since his opponents are usually not trained in or interested in narratology:

As Jenkins himself points out in his reply to Eskelinen in First Person/EBR, he is not a narratologist. The real irony of the “ludology vs narratology” “debate” is that virtually all the so-called ludologists are actually trained in narratology. Go figure.(Aarseth 2005)

Actually it does figure. Narratology is a category of interest to the computer game formalists. It represents the authority against which they have rebelled, the thing that must be repudiated in order for their own interpretation to have meaning.  As the humanist theorist and literary critic Harold Bloom has pointed out, great writers often suffer from an “anxiety of influence,” a need to separate from the reigning constructs of the tradition into which they are born. For the truly innovative the work that has gone before must be reinterpreted and even creatively distorted into a new intellectual landscape, which Bloom has called “a map of misreading.” Perhaps this is true of the scholarly innovator as well as the great novelist or poet.  Perhaps narratology is the influence that has caused a particular group of game scholars the most anxiety, the landscape that must be reconfigured in order to reorder the academy and rethink these new and fascinating objects.

The opposition to narratology, and the imposition of the label on those who do not choose it, seems at times to be a complaint looking for a target. After lamenting the lack of debate in Umea, Aarseth issued this challenge:

Hopefully there will be some strong “narratological” position paper at DiGRA, where the “ludologists” are met with rational counter-argument … and games are shown to be stories in a well-argued and defined way. Until then, the burden of argument rests with the narrativists.

To which we have to ask whose burden? Who is obliged to defend the position that games are stories? What Aarseth his followers would like is a formalist argument, starting from the texts that have been most influential in European narrative studies (Eskelinen 2004). In fact, no one has been interested in making the argument that there is no difference between games and stories or that games are merely a subset of stories. Those interested in both games and stories see game elements in stories and story elements in games: interpenetrating sibling categories, neither of which completely subsumes the other. The ludology v narratology argument argument can never be resolved because one group of people is defining both sides of it. The “ludologists” are debating a phantom of their own creation.

It is time to reframe the conversation. At some point in all of these debates, these two commonsensical facts are usually acknowledged: games are not a subset of stories; objects exist that have qualities of both games and stories.  With students flooding our graduate and undergraduate programs around the world, they should no longer be confused by the appearance of an either/or choice between games and stories, or distracted by an unproductively sectarian discourse. It is time to recognize the difference between the useful formalist methodology and the distractingly prescriptive ideology of game essentialism. No one group can define what is appropriate for the study of games. Game studies, like any organized pursuit of knowledge, is not a zero-sum team contest, but a multi-dimensional, open-ended puzzle that we all are engaged in cooperatively solving.

This entry was posted in Ch 13 Game Model. Bookmark the permalink.