When Dick Clark died earlier this week, he was best known  as a “New Year’s Eve Icon” from his hosting the annual televising of the Times Square celebration, but he came to prominence earlier as the host of two ground-breaking TV shows, American Bandstand, which aired weekday afternoons and introduced baby boomer teenagers to new records by showing Philadelphia teenagers dancing to the latest releases, and the New York-based Dick Clark Show, which put rock ‘n’ roll performers in front of screaming teenagers for half an hour every Saturday night.

Dick Clark’s success rested upon a change in music distribution platform around 1958  to a new technical standard: the mass-produced 45 rpm vinyl record, smaller and cheaper than the 78 rpm singles that were the previous market standard. END_OF_DOCUMENT_TOKEN_TO_BE_REPLACED

Posted in Ch 1 Design in an Evolving Medium, Uncategorized

The Etch-a-Sketch and the Stone Tablet 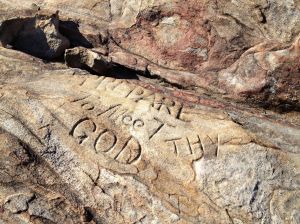 Inscription in stone on Kennesaw Mountain in Georgia.

Cable news is obsessed this week over inscription technologies. At issue is whether the political positions taken in primary elections are as erasable as the magnetic writing on an “Etch-a-Sketch,” as the Republican front-runner’s campaign manager imprudently suggested, or written “in stone” as the Republican challenger describes his own unchanging pronouncements.

Politicians would do well to remember that we live in the age of digital media which has disruptive inscription affordances — combining persistent memory with ease of participation by multiple voices of authority.